McLean, VA — May 10, 2022 — Appian (NASDAQ: APPN) announced today that it has received a verdict from a jury in the Circuit Court for Fairfax County, Virginia, awarding it $2.036 billion in damages from Pegasystems Inc. (NASDAQ: PEGA) for trade secret misappropriation. The jury also found that Pegasystems violated the Virginia Computer Crimes Act. The jury further found Pegasystems’ misappropriation of Appian’s trade secrets to be willful and malicious. Appian brought the case to trial to ensure the protection of its proprietary intellectual property, including its trade secrets. 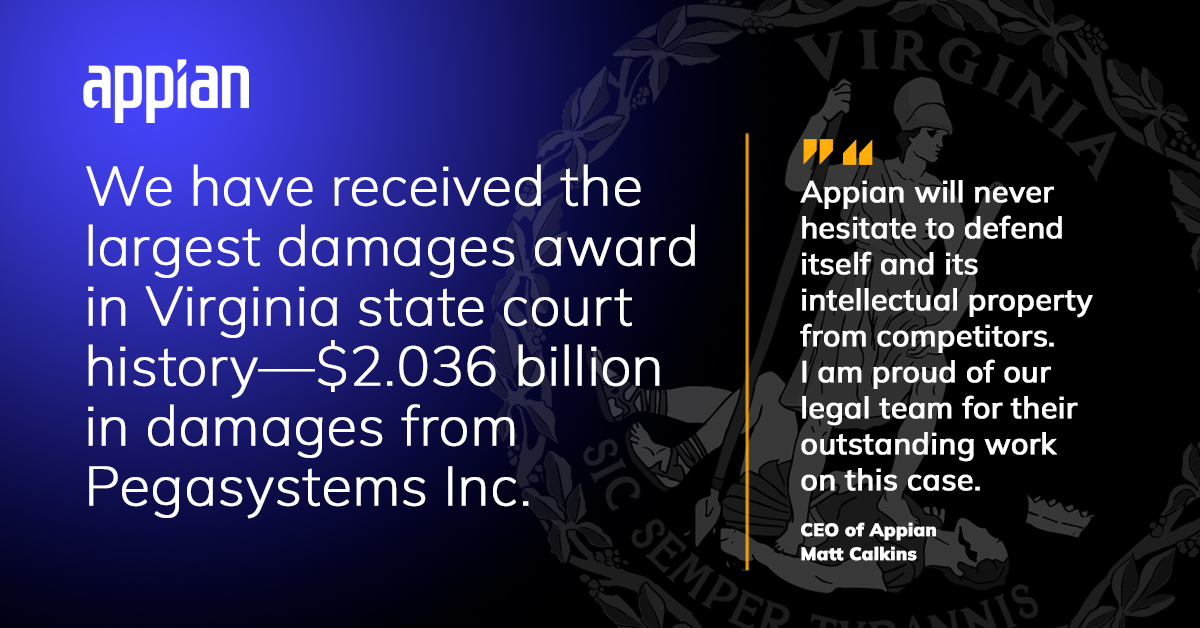 We are very grateful that the jury held Pegasystems accountable for its wrongful conduct,” stated Christopher Winters, General Counsel at Appian. “We put forward strong evidence that Appian trade secrets were misappropriated by Pegasystems. The award of substantial damages to Appian is entirely appropriate given the nature and extent of what Pegasystems did.”

During the seven-week trial, Appian presented evidence that Pegasystems hired an employee of a government contractor (the “Contractor”), to provide Pegasystems with access to Appian’s software as a part of an effort to learn how to better compete against Appian. In hiring the Contractor, Pegasystems instructed its third-party contracting service to recruit someone who was not “loyal” to Appian. Appian provided evidence that the Contractor, who worked as a developer in the Appian software under a government contract, violated his employer’s code of conduct and his employer’s agreement with Appian by providing access to an Appian competitor.

The Contractor, referred to as a “spy” internally at Pegasystems, helped Pegasystems generate dozens of video recordings of the Appian development environment for use by Pegasystems in compiling competitive materials and evaluating improvements to its platform. Appian put forward evidence that Mr. Trefler attended and participated in a meeting with the Contractor and received Appian’s trade secrets supplied by the Contractor. The videos and documents created in connection with Contractor’s efforts were then used by Pegasystems to train its sales force to better compete against Appian. The effort was later labeled “Project Crush” within Pegasystems. At one point, a Pegasystems employee reviewing the materials exclaimed that “we should never lose to Appian again!”

Appian also submitted that Pegasystems’ product development team reviewed the materials provided by the Contractor and changed the course of Pegasystems’ product engineering to take advantage of the Appian technology they saw. Specifically, Appian put forward documents and testimony that Pegasystems made use of the trade secrets gleaned from the Contractor to make improvements with respect to, among other things, ease of use, and social and mobile capabilities in the Pegasystems platform.

Appian believes that the damages award by the jury is the largest award in Virginia state court history.

Appian’s CEO, Matthew Calkins, stated “Appian will never hesitate to defend itself and its intellectual property from competitors where it believes they have acted illegally. I am proud of our legal team for their outstanding work on this case. It was a masterful performance and the jury’s verdict is the result of their efforts.”

Appian was represented in the case by Patterson Belknap Webb & Tyler, led by Adeel Mangi, Muhammad Faridi, and Jeff Ginsberg, and by Holmes Costin & Marcus, led by Ellen Marcus and Sheila Costin. John McNichols, of Williams and Connolly, also appeared in the case on behalf of Appian. Christopher Geyer, Appian’s Deputy General Counsel for IP & Litigation, played a lead role in developing the case and managed the litigation from an in-house perspective.

The jury’s finding that Pegasystems’ conduct was willful and malicious may entitle Appian to a further award of attorney’s fees under Virginia law.

The jury’s verdict and the court’s entry of judgment is subject to appeal by Pegasystems. Pegasystems is not required to pay Appian the amount awarded by the jury until all appeals are exhausted and the judgment is final. Appian cannot predict the outcome of any appeals or the time it will take to resolve them.

Appian is the unified platform for change. We accelerate customers’ businesses by discovering, designing, and automating their most important processes. The Appian Low-Code Platform combines the key capabilities needed to get work done faster, Process Mining + Workflow + Automation, in a unified low-code platform. Appian is open, enterprise-grade and trusted by industry leaders.