“For a $5 trillion industry as mature as insurance," says Galbraith, “technology that can help solve any one of the seven fatal flaws would make a pretty good business. There's a lot of room for improvement.”

But there’s the human factor, says Galbraith, which plays a big role in how companies react to the rise of game-changing technology like low-code automation. Nobody wants to be the first mover when it comes to scaling cutting-edge technology, says Galbraith, but organizations that lead the way can gain a tremendous competitive advantage.

On the other hand, risk factors are changing faster than ever in wake of COVID-19. Which means it’s more important than ever for insurers to be able to respond quickly to threats and expectations, and to be able to offer customers more custom products at a much lower price point.

But it could cost tons of money for major carriers to stand up a new claims management system or modify an existing one to cover a new threat. In the final episode of this two part post, Galbraith breaks down how low-code automation helps insurers bridge technologies that can help make them more agile, and operate at the speed of today's economy without spending truckloads of money or waiting five years for their digital transformation journey to take off.

Now, it’s time to tune into this week’s episode of Digital Masters with InsureTech expert and best-selling author Rob Galbraith, also known as “the most interesting man in insurance”: 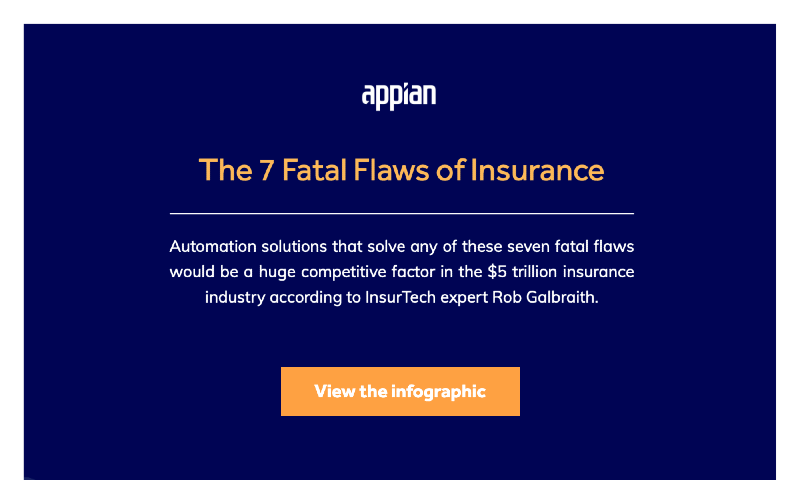 Appian: The digital revolution and the COVID-19 pandemic have had a tremendous impact on risk management in the insurance industry. Which means being able to respond quickly to threats and offer customers more custom products at a much lower price point is more important than ever. So, what do you make of the argument that standing up a new system or modifying an existing system to cover cyber attacks and other fast-moving threats is a money-pit for insurers?

Galbraith: It doesn't have to be. So, for example, between low-code solutions and automation, it's much faster—8 to 12 weeks to deploy a new product or service out to the marketplace. You're talking about deployments in weeks or months rather than years.

This kind of speed is more important than in the past. Insurance products haven't really changed very much from decade to decade. So, there hasn't been a need for that kind of agility until now.

Appian: Let’s switch topics. When I think about low-code I think of it as an innovation platform. Some experts argue that the innovation rule of thumb is that it takes about 10 years to build a new platform and another 10 years for it to catch on. So, when you look at the next decade, what will the insurance industry look like in terms of tech adoption? And which technologies will have the biggest impact on the industry?

Galbraith: Yeah. That's a great question. I think first and foremost, people need to think of their (IT) system as a platform, as you mentioned. So, what does that mean? In the past, you were in the mainframe world, right? You’d have these really big, powerful, very fast and efficient systems. But they only did a few things well like quick transactional processing. You probably had some large data warehouses for analytical purposes. So, these systems tended to have a single purpose.

Appian: And when there was a new system or technology you wanted to work with, what would you do?

Galbraith: Well, the cost of integration was exceedingly high. But in today's world, you've got application programming interfaces or APIs and you can create an API layer and basically kind of open your system in a secure manner to pretty much anybody out there. And because there are so many companies that are innovating in so many different areas, the insurtech space is critical to allowing you to quickly integrate with third parties and offer innovative solutions.

So, there are some pretty cool applications already out there, mostly in the specialty or niche space. But I expect that over the next decade these applications will become more mainstream for companies that don’t think of modernizing their systems as a years long journey to digital transformation.

I think that taking advantage of technology such as low-code automation allows you to leverage your legacy system investment.

Appian: In what way. Can you give an example of what you’re talking about?

Galbraith: So, low-code is going to bridge technologies that can help make your organization more agile, make you work at the speed of today's economy without having to wait five years for that full transformation journey to take off. So, companies that are embracing some of these enabling technologies like low-code, I think they're going to be in a much better position 10 years from now.

Appian: Which reminds me of the old three-to-five-year strategic plan. Lots of companies still have them, but they’re not worth very much because the digital world is changing so fast.

Galbraith: That’s right. So, it’s essential to always have a strategy but then validate it every six months.

Galbraith: Yes, I think it is something that companies need to take seriously.

I do understand some of the skepticism and frustration. A lot of companies kind of embarked on the digital transformation journey in the early to mid-2010s, and quite honestly a lot has changed.

So, if you made a decision to go down a certain path in 2015 and maybe you're going to change to a more modern system, but you still were going to have an on-prem solution and you're kind of working with a multiple-year long implementation. Well, in 2019, 2020, a cloud-based, fast paced solution probably looks a lot more attractive than it did five years ago.

So unfortunately, when you embark on some of these digital transformation journeys because of the timeline and the cost involved, you can very much kind of get stuck. You’re very path dependent and kind of saying, "Well, I'm halfway down my journey. I've got to kind of suck it up and finish it."

Ultimately, you're going to be in a much better place than had you not embarked on the journey in the first place.

Appian: That’s an excellent note to end on, Rob.

You can learn more about Rob Galbraith by visiting the website for this book at http://endofinsurance.com as well as by following him on Twitter at @robgalb and connecting via LinkedIn.

P.S.: Check out Galbraith’s thought-provoking chapter in the recently published HYPERAUTOMATION book, a collection of expert essays on the future of low-code development and business automation.