Automation: How to Thrive Amid Remote Work Stress, Part 2

The remote work revolution is here to stay. But making the emotional pivot to make remote work pay off won’t be easy. So says Joe Kennedy, a Partner and Technology Consulting Leader with PriceWaterhouseCoopers (PwC).

In the last episode of this two-part post, Kennedy reminded us that we’ve always had the capability to do remote work. He says that the challenge now is to find and fix the rough patches in our business processes to make work more efficient. That’s where he sees the acceleration of remote work happening.

Kennedy also took us to school on the advantages of remote work and why it will propel us forward. But he also warned us the remote work revolution has made doing business more complex, uncertain, and riskier than ever before.

So, what’s the secret to thriving in such a volatile environment? There’s no template for success, says Kennedy. But if you’re looking for pragmatic insight on how to get the most out of remote work, check out Kennedy’s expert commentary in this final episode of Automation: How to Thrive Amid Remote Work Stress. 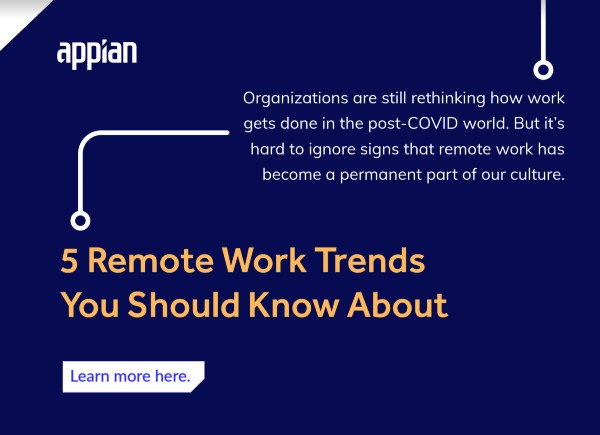 Appian: So, if you’re a CIO, what can you do to get ahead of the remote work curve?

Kennedy: Technology is a more critical part of the business than ever before. CIOs should invest in educating workers about technologies that can empower them to do things that they may have never imagined, never thought about before. In the past, you may have been too busy driving the business to think about this.

But this is the time to teach and educate workers about how technology can augment what they do. That's the kind of mindset you need to create the leapfrog effect that propels businesses forward.

The CIO should be the proctor to make sure the business is capable of doing that.

Appian: So, let’s connect the dots back to remote work. We're pretty deep into the trend right now. From your insight and experience, how do you think things are going so far? Is business productivity holding up? Do you think remote work will open the door to more flexible work patterns in the future?

Kennedy: I think we’re going to see gains in worker comfort and efficiency, meaning you don't have to spend an hour and a half commuting to and from wherever your workplace is. So, there's an advantage to remote work that I think really propels us forward. But there's also massive risk because I don't think that this is a healthy lifestyle for everyone.

I think it's taken a toll on us sitting in front of a computer all day long on zoom calls. I can't imagine that my eyes are nearly in the shape that they used to be when I wasn't staring at a screen all day long. I do everything I can to stay in shape, and I will tell you that it has not been enough. It has not been nearly enough during this pandemic.

I don't think we know how to do this yet. I don't think that we're efficient at shutting ourselves off yet. You know, my friends would complain about me socializing with people I hadn't seen in a while and my phone would go off and instantly I’d pick it up and my friends would look at me sideways like: “why can't it wait.”

Because of COVID, we're not with our friends and family the way we used to be. And I think this has made remote work that much worse.

The pandemic has ripped out a whole bunch of walls that didn't exist before. So, I think there's a lot of power in the fact that we're able to work remotely and be as efficient as we are.

Now we have to figure out how to create even more efficiency and separate our home and work life.

Appian: So, what can business leaders do to maintain a sense of team and community in their organizations in this new remote work environment? What’s the playbook for that?

Kennedy: I think there are a lot of playbooks. Number one, you have to be able to demarcate time. For example, make a point to stop working at four o'clock every day. That doesn't happen anymore. So, I think what's important from a team perspective is enabling people to demarcate time.

At PwC, we've done a number of things to relieve stress. For example, we've created life plans where we'll have eight or nine people on a call. And they each present their own life plan. They tell their life story because people aren’t doing that like they used to do. I used to sit down with somebody like you after a meeting for 15 minutes, and we’d talk about your kids or what you've done, or how you got to where you are and things like that. When you've lost the ability to do that, it hurts. Companies also have to make work more fun. They should find ways to gamify work.

We have to spend more time talking about our personal lives with people who are comfortable doing that. And I think we just have to make work a little bit more pleasurable and not such a grind.

Appian: Are you a fan of the hybrid work model that combines being in the office with working remote? And how can companies reach agreement with employees over what that looks like? There are so many variables.

Kennedy: Yeah, this is where I think we're just naive as a society—it took a long time for some companies to believe that people can actually work at their own pace and meet a deadline. Hybrid work means a lot of things to a lot of different people.

There are parents that have to pick up their kids at a certain time during the day or drop their kids off at a certain time during the day but might be available late in the evening to work. Someone else might want to work 15 hour days, but only wants to work four days a week because they need three days to decompress. Maybe you have an employee who wants to go into the office two days a week and work from home three days a week.

Appian: So, basically if you say hybrid work to 15 different people, you’re going to get 12 different answers.

Kennedy: And the only reason the other three people agreed is because they had a conversation with you about it before. So, I think we have to stop this concept of where we have a certain number of hours that we have to work. We have to start talking about the deadlines that make our business impactful instead. For example, tell everybody that by the end of next month, we're going to release a software package. Try to get everybody to raise their hand and agree with the goal.

Next, set up two checkpoints during that period of time. For example, week three and week seven. Then you figure out how to get it done. And you can self-organize to make it happen. And collaborate with people you’ve got a dependency with and get that done.

We're all big boys and girls. We know how to communicate with each other to get stuff done. So, maybe we stop talking about hours and times, and we start talking about milestones and schedules and enable people to get the work done instead.

Kennedy: At the end of the day, every, every culture is different. I'm in consulting. We're kind of a nose to the grindstone 60-hour type week culture. There are other companies that have very light days but spend a lot of time working on weekends because that's when the markets are closed and that's when they're able to work on critical IT systems. There are companies that really value an individual's time away from work. And there are other companies that will allow you to run as hard and fast as you want until you burn yourself out. But I see remote work as the culture of the future.

Appian: So, what does success look like for remote work in a large organization?

Kennedy:  I think it goes back to setting milestones and pulling away from a nose to the grindstone culture. If not, then you're going to be on zoom calls from 8:00 AM to 8:00 PM. And eventually that's going to create a morale problem. So, I think what you have to do is start creating objectives at the firm level. Allow workers to create a little bit more of their own culture within the organization.

This is important, because now that people are living and working from home, it's not just about the culture of work.

It's the culture of: do I have kids running through my room and jumping on the bed in the background of a Zoom call. Or I didn't mean to send that email. It was my cat walking across the keyboard.

So, there's a lot to unpack when it comes to the culture of work. I think we have to allow culture to exist, but also allow for a lot more variation.

Appian: Earlier we touched on digital transformation and technology. I want to talk specifically about automation as it relates to the remote work trend. What role do you see automation playing in the future of remote work?

Kennedy: I think it will play a massive role. Just think of all the things we do on a day-to-day basis. Many of them really don't need to be done by a human. They can be done by machine learning. They can be done by better processes. They can be done by pulling data together from across the organization. So, it's about enabling people to make faster, better decisions by looking at a single screen, as opposed to looking up 50 different spreadsheets to figure out what they should do.

The big question is: How do you take the things we don't like to do, the menial mind-numbing stuff and automate them out of existence. Then we can concentrate and focus on the things that make us human and the things that give us joy.

That’s the key to success. You should always be automating.

I used to have this personal saying which was: I have one job and that is to automate my job out of existence. I have an agreement with my boss and my boss has one job. And that is when I've automated all the menial work out of my job and I've got nothing else to do, give me somebody else's job. And my job is to keep doing that because as human beings, I think our job is to get away from all of the tasks that are menial and don't add value. Let's automate them out of existence.