Low-Code vs. No-Code: What it Means for Insurance

As insurtechs and tech giants continue to disrupt the market, traditional insurers are under increasing pressure to modernize and keep pace with customers’ digital expectations. This trend shows no signs of slowing down. In fact, global insurtech funding hit a record high of $7.​4 billion in the first half of 2021, exceeding funding raised for the entirety of 2020, according to a report from Willis Towers Watson.

It seems like everywhere you look there’s new technology promising to solve business challenges or inefficiencies. But how can traditional insurers move the needle while avoiding costly “rip and replace” initiatives and minimizing technical debt?

Technical debt is the time and cost that IT organizations must spend maintaining existing systems and “keeping the lights on.” IDG estimates that IT teams spend nearly 40% of their time addressing and servicing technical debt.

Why is no-code/low-code needed?

We continue to see a shortage of labor around the world, especially for new developers. In the United States alone, there were 1.4 million computer science jobs at the end of 2020, but only 400,000 graduates to fill them.

Insurers can’t hire their way out of this problem, so business and IT leaders need to figure out how to build mission-critical insurance applications more efficiently with fewer resources. That’s where low-code and no-code platforms come in. By choosing a platform that is able to tackle complex business problems, development teams can rapidly build applications—whether for claims, underwriting, compliance, etc.—using visual design tools and a drag-and-drop interface.

With the right platform, a developer with just two years of experience can perform as if they’ve spent decades in the field. And best of all, insurers can develop applications 10 times faster than they could with a traditional development approach.

Whereas in the past it might have taken 12+ months to create an application to automate data ingestion during first notice of loss (FNOL), now the same (or a better) application can be developed in mere weeks. This level of speed and agility is a game-changer for insurers, who have historically gotten stuck in cycles of multiyear, multimillion dollar digital transformation initiatives that underdeliver while consuming significant IT resources.

In addition to unprecedented agility, the right platforms allow insurers to extend and unify their existing legacy and core systems without undergoing massive core modernization or “rip and replace” initiatives. They can also easily connect to the latest advanced data sources (e.g., IoT, telematics, insuretchs, etc.) through open APIs and integrations.

But what is the difference between low-code and no-code? Which one is right for your organization?

When it comes down to it, fundamentally, there really is no such thing as “no-code.” As Gartner says in a recent research note, “‘No-code’ is a marketing term, implying the tool is for non-professional developers. There is always code and software running somewhere, just hidden.”

So while both methods offer improvements over traditional hard coding, according to Gartner, the biggest differences are the target user groups. 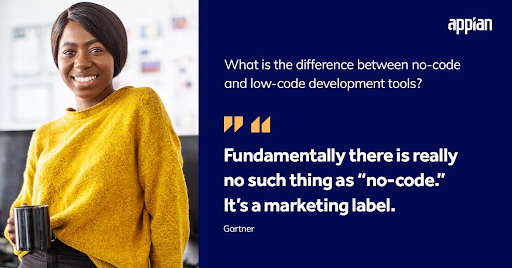 No-code tools are typically marketed to citizen developers or non-developers, not to IT or expert developers. The buzzword “no-code” makes these tools feel more approachable to non-developers. Because these tools try to avoid making users code, customization options are limited. But no-code does not always truly mean no-code. If you ever want to customize your application or are dealing with complex workflows and processes (and you typically are in insurance), you’ll likely need to add code somewhere, which will require IT resources.

Low-code, on the other hand, is typically marketed to professional developers, but it doesn’t require coding expertise either. A junior developer can be very productive with a low-code development platform. Plus, low-code doesn’t always require coding. With many low-code platforms, it’s possible to create an application or automate business processes and integrate data without any coding at all.

How to choose the right technology for your business.

When looking at low-code and no-code solutions, Gartner has some sage advice: “Ignore vendor hype and promises and instead focus on the underlying platform architecture and technology approaches of the tools to find the best-fit ones—regardless if they call themselves low-code, no-code, or both.”

Insurance organizations should look for a platform that automates their complex business workflows, integrates with existing legacy systems and advanced third-party data sources (think IoT/wearables, telematics, insurtechs, etc.). A great platform will have the ability to orchestrate and scale enterprise-wide to quickly meet future challenges so insurers can gain a competitive edge now and for the future.

To dive deeper into the low-code vs. no-code discussion, check out the full Gartner paper, Quick Answer: What Is the Difference Between No-Code and Low-Code Development Tools?